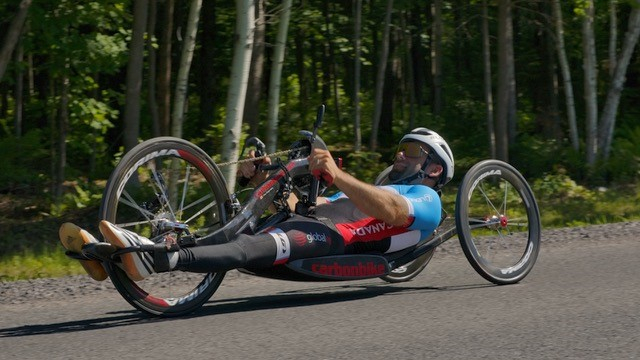 Imagine spending the past 7 years giving your heart and soul into a sport that brought you back to life (metaphorically speaking). Now flash forward to 2019. Your dreams are coming to fruition, you have gotten the call from the Canadian Paralympic Committee giving you notice that you are on the short list to take part in the 2020 games in Tokyo… A sheer rush of joy flows through your body and tears begin to form in your eyes… This is it…

We all know what happens in 2019 and the follow-up of the worldwide pandemic along with its strict travel regulations. Everything you worked for is put on hold and the games are canceled/postponed. Now meet our brand ambassador Joey Desjardins, Motion Composites handcycling phenomena. He had to live this challenge firsthand. He did make Canada’s short list and was waiting for the call when everything in the world was canceled or put on hold. But this is not a sob story. This is a story of triumph: we are proud to announce, Joey will be attending the Paralympic games this August to represent team Canada in the H3 handcycling category. After waiting months on end for any type of news, he got the call a few weeks ago that would change his life forever. 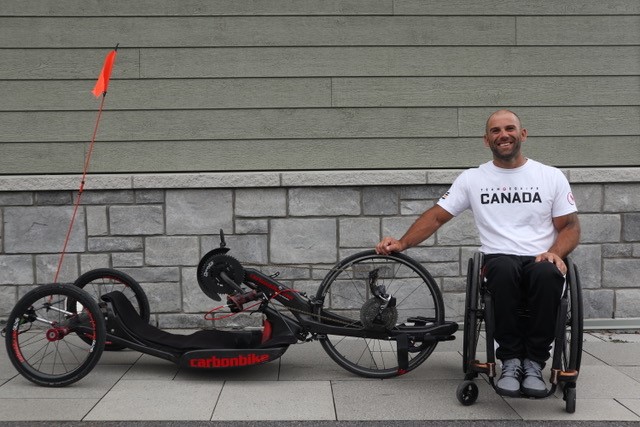 For those of you who don’t know Joey Desjardins, he is a father of 2 beautiful girls (Stella and Zayla), a sprightly competitor, and an overall awesome guy from the small town of Hawkesbury, ON.

In 2009 Joey was involved in a dirt bike accident that would leave him paralyzed from the waist down. He explained, “It was hard, and I needed to find something that gave me life again.” It was at this time during his rehab he joined the peer group SCI Ontario and got connected with his mentor, Chris Borne. Chris showed him his bike and riding equipment and helped him learn about the sport. The first couple months, Joey took off. He describes, “It was a solo discovery of new life and freedom.” For the next few years, every day, he would take his own trailer and equipment and ride solo through the providence trail in Carillion, QC. To say he was hooked is an understatement.

Between 2013 and 2016, it was always just an outlet for Joey, a meditation if you will. But, in 2016, things began to change. Joey was getting noticed for his incredibly fast times. Ironically enough this was also the time he brought his first daughter, Stella, into this world. Joey explained laughing, “It really is some sort of magic, everyone has their best year following having a child, I kid you not, it happens all the time.” Shortly after he had his second daughter Zayla, he explains, “Kids definitely change up your routine a little bit, I had to adapt my life and training just a bit.”

It was also around this time when Joey began to get national recognition scoring 15th in H3 Road racing and 12th in time trial in 2018, followed by an 11th in road racing and 9th in time trials in 2019 respectfully. Then, 2020, the pandemic hit, it did not slow Joey’s training at all, but he had to adapt. “We formed a training team bubble where we would go up to Bromont and train with some other team Canada prospects: Alex Hyndman, Charles Moreau, Marie Eve Croteau, and Shelley Gautier. It was a competitive group to train with and we pushed ourselves every day.” With the training going on and only 2 months until the games, Joey and his colleagues got the call they had been waiting for their whole lives. “The committee called me up to inform me I had made a spot on the team and that I would be traveling to Tokyo in August.” He relived the story with a huge smile on his face. It was also an historical event as it was the first time in the history of the sport Canada was sending 3 people to compete in the same event as Joey, the H3 category. 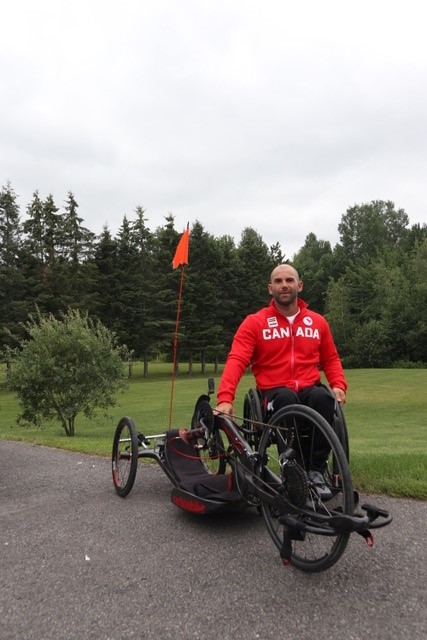 Background on the sport

For those of you who have never heard of handcycling here is a quick overview of the sport:

- Handcycling is a solo or group sports category that takes day-to-day training to hit your times that a trainer sets for you. The faster you get the higher you can potentially place in competition. Acceleration in this sport is done through pedals propelled by your hands while the rider is lying down on its back.

- Solo events: Time trials—it is a head game to push through the pain. Sometimes you feel like you did well but realize you were 3 seconds slower than the last training session. You must give all your focus and effort 100% of the time. When you have thoughts of regret or quitting, you are the only person around to convince yourself otherwise.

- Group events: Road race—you must match or step over your threshold to better help your team. Drafting (using your teammates as a barrier to block the wind) is a huge aspect to not only better your times but to help your team. You don’t want to leave the group or leave anyone behind; you are only as fast as your slowest teammate. 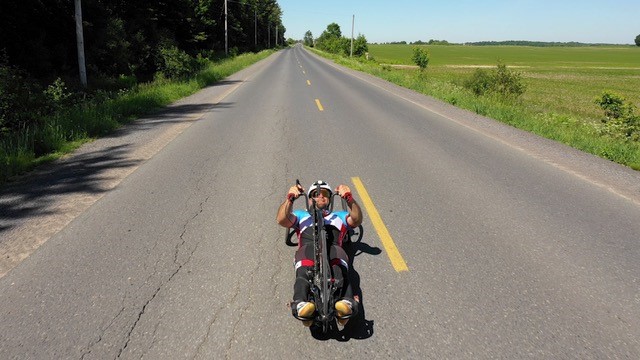 Joey is beyond excited for his trip, and we were curious to see how the pandemic and cross world travel would affect his preparation. “Our trainer will be traveling with us to Tokyo. All training will have to be done within our bubble at the hotel. We will be riding a lot of virtual circuits, which can make it hard adjusting to mountain training with the different elevations. I really hope we get to leave the hotel and explore the area and the Olympic grounds, but we are not sure for now. Fingers are crossed because we all want the true Olympic experience. That plus I have never been to Japan!”

“The most exciting thing is of how proud our community is of us; I come from a very small town, and I am pretty sure I am the first person to ever go to the Olympics from there. I want to make everyone proud of what I accomplish while in Tokyo and am very excited to be representing Canada and the Motion Composites brand.”

The Motion Composites family is so thrilled and delighted by Joey’s accomplishments and wish him the best of luck in Tokyo at the 2020 Paralympic games. Our heart is full of pride; Joey, we believe in you to GO BEYOND while in Tokyo!

Be sure to tune on August 31st and September 1, 2021, to cheer on Joey as he competes against the rest of the world.